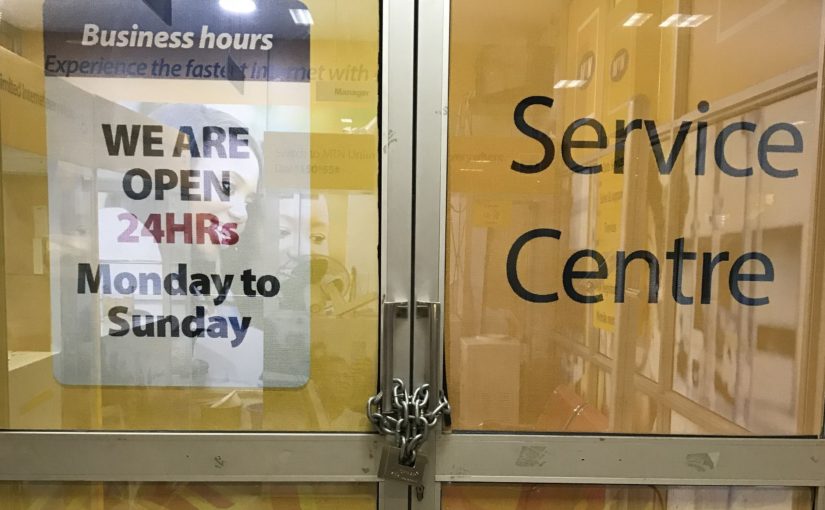 I discovered an interesting contradiction between ambition and reality at an airport on one of my recent trips to Africa—the picture says it all. I admit that it was taken after midnight, but nonetheless. The service center was located next to a conveyer belt that was ready to return baggage to hundreds of people that had been on long-haul flights—myself included.

The picture, to me, provides an excellent leadership metaphor for what it means to walk your talk. It is much more rewarding to promise less as a leader and to keep your promises than to not follow through. Lack of implementation disappoints both customers and staff. If those who lead do not keep their promises, the consequences are easy to spot. Employees might not continue to go the extra mile when the next change management process calls to action (which it will, believe me). Work will instead revert to the rulebook. Why bother, after all? Why put in any additional effort? It’s a question of leadership. Do employees feel that they have a decent role model in their leaders? No. Do they feel taken seriously and at eye level? No. Do unfulfilled promises make any sense to them? No.

With some explanation at the door, the contradiction would have passed without irritation. Transparency, perhaps, as to why things aren’t working out the way they should be, or some apology for what’s keeping the doors closed. It would have been easy for an entrepreneur to make haste of the situation. Instead of head-shaking or compassionate smiles, a leader would have proven to be trustworthy. That’s how leadership starts and ends: In trust and with people’s trust.

Believe it or not, trust is much easier to do than it seems, and it is so much more inexpensive than picking up the pieces later on. All it requires is some thoughtfulness, some extra effort, and some courage now and then, too.